Domaine Weinbach – The Jewel of Alsace 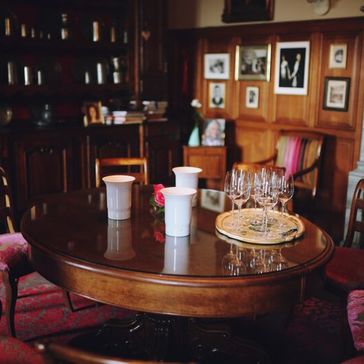 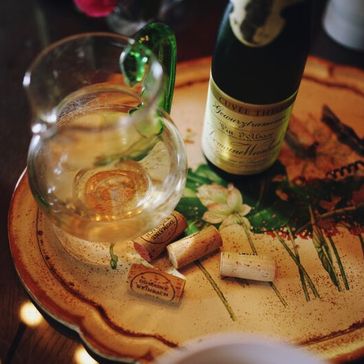 “I like a bottle of Weinbach, please … Actually, could you make that 2 bottles, thank you”. Adam, a character in the binge-inducing hit Netflix series, House of Cards, ordered this from room service as he prepared for a romantic tryst with Claire (for trivia fans, it is from Episode 4 of the first Season). Catherine Faller, the owner of Domaine Weinbach, gleefully shared this tidbit with us when we sat down with her in her memento-strewn dining room. She assured us that it was not a product placement and its cameo on the show was a complete but very pleasant surprise to her. However, we find its feature to be quite fitting because the wines of Weinbach cater to a more sophisticated audience, the same demographics that the show is pitching at.

If one were to grade French wine on the basis of its intricacy, then Bordeaux would be elementary and Burgundy arcane but Alsace would be off the charts. Alsace is tucked in the northeastern corner of France just across the border from the Black Forest of Germany. It is a narrow strip of land sandwiched between the Vosges Mountains in the west and the Rhine River in the east. It runs north to south for about 170 kilometres and is traversed by Route des Vins d’Alsace (Wine Route of Alsace). For a more recognizable reference, it is proximate and parallel to the road from Strasbourg to Basel. Within this strip of land, there is a fault zone which runs a length of about 120 kilometres but is only a few kilometres in width. These are the seeds which spawn the myriad complexity of this wine region.

In this zone, eons of geological action has exposed various layers of rock and created a mosaic of soils of differing origins. The result is that Alsace has the most diverse geology of any wine region on earth. Added to the mix is its topography. This zone is sheltered from the rain by the Vosges Mountains and is the driest region in France (600mm of annual rainfall versus 850mm in Bordeaux). The best terroirs of Alsace are to be found in the slopes at the foot of the Vosges. These vineyards are at a high altitude and elevation and therefore each is affected by their own microclimate. At the same time, the soil in these sites has dissimilar composition. These varying permutations and combinations mean that each site is distinctive and unique in its own right.

The human factor is also omnipotent. In the past centuries, ownership of this region has seesawed between France and Germany. In just the 84 years between 1871 and 1945, it has changed hands 4 times. Although it is now part of France, the Germanic imprint is well-entrenched. The flute shape of the wine bottles is the same, the name of the towns and the wineries sound German. In fact, the names of all 51 grand cru of Alsace originated from the German language. German and Alsatian wines are predominantly white and both champion Riesling. For the uninitiated, it is difficult to differentiate between a German and Alsatian Riesling. A simple tip – Alsatian Riesling is generally dryer (less sweet) and higher in alcohol than Germany’s.

Not being one to make things simple, the Alsatians have made this topic even more obtuse by persisting with the practice of labeling their wines by its grape variety. Alsace is the only wine region in France that does so. There is an abundance of varietals, think Riesling, Gewurztraminer, Pinot Gris, Pinot Noir, Pinot Blanc, Muscat, Sylvaner; and the wineries make wine from most if not all of them. Therefore, deciphering an Alsatian wine label is an education in itself.

The Fallers of Domaine Weinbach

From this quilt work of soils, microclimates and varietals; the Fallers of Domaine Weinbach have fashioned a consistently brilliant array of wines. In the local German dialect, Weinbach means “wine brook”. The domaine was established by an order of Capucines monks who cultivated 5-hectare of vines enclosed in a wall in the present day commune of Kaysersberg. They named it “Clos des Capucins”. Written references to this order and their activities dated back as early as the 9th century. In about 1612, the order added a monastery on the grounds. During the French Revolution, the property was seized and sold by the authorities. After a succession of owners, the Faller family acquired the domaine in 1898. The former monastery now houses the domaine and Clos des Capucins is proudly displayed on the side of the building and the neck label of the domaine’s wines.

Under the aegis of the 2nd generation in the person of Theo, the domaine was vastly expanded to almost 30 hectares. Apart from Clos des Capucins which is a monopoly of Weinbach, there are grand cru holdings in Schlossberg, Furstentum and Mambourg. They also own plots in Altenbourg which is situated below Furstentum. When Theo died in 1979, the domaine was already recognized as one of the top wineries in the world. His widow, Colette, seamlessly held the reins of the estate aided by their 2 daughters, Catherine and Laurence. Under her helm, Colette not only perpetuated the tradition of the domaine but also elevated it to true stardom. Laurence assumed the winemaking duties in the 90s and converted the vineyard to biodynamic practices for which it was certified in 2010. She took a brief hiatus to raise a young family between 2010 and 2013. Soon after her return, tragedy was to strike when she succumbed to a heart ailment in 2014. In February of this year, Colette passed away. In the space of a year, Alsace lost a young talented winemaker and one of its guiding lights. The task of carrying on is now left to Catherine and the 4th generation being her 2 sons, Theo, who is already working in the vineyards and Eddy who would soon be joining.

The wines of the domaine

Alsace is renowned for its aromatic white wine and the best of the best hail from Domaine Weinbach. Robert Parker described Weinbach wines as “the richest and most flamboyant” in France. Other noted critics lauded the wines for their “purity and precision” and the winemakers’ ability to capture “the tiniest detail” in their wines. It is fair to say that the domaine makes wines in its own inimitable style. It is fragrant, powerful, concentrated, yet elegant and fine. And most important of all, each wine has its own distinct personality. As an added bonus, it is extremely food-friendly and matches well with all styles of cuisines including the challenges posed by Chinese cooking. This was repeatedly stressed by Catherine during our tasting and ably demonstrated by her. Stay tune for Part II… when lunch is served! 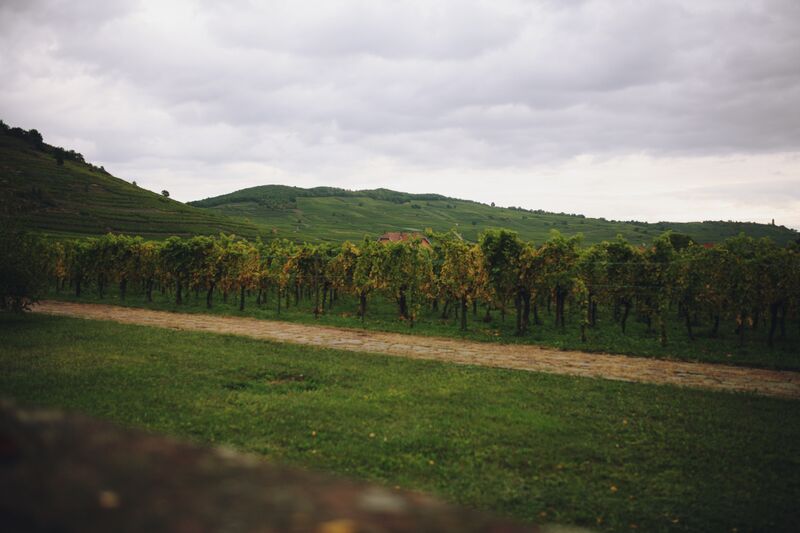