A Fairytale Evening at Margaux 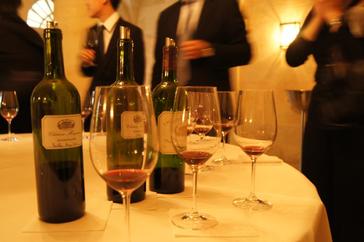 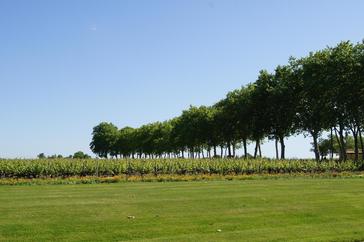 George McDonald, the 19th century Scottish poet, said In giving, a man receives more than he gives. And so it was that a modest act of giving on our part resulted in an enchanted evening at the fabled Chateau Margaux. In late 2010, we attended a charity dinner with a group of friends. To assist in raising funds for a worthy cause, Chateau Margaux donated a dinner at its winery and offered it to the highest bidder. After a brief pow-wow amongst us, we decided to bid for it. The bidding was the easy part; the challenge was matching our schedules so that we can meet in Bordeaux.

So on a brilliant afternoon, our van winded its way along the roads of Medoc past a string of illustrious chateaux. However, all these classified growths shrunk into relief when we approached the gates of Chateau Margaux. Before us and dominating the landscape was the very symbol of Chateau Margaux, the regal 19th century manor which graced the label of their wines. As befitting one of only 4 chateaux which was granted first growth (premier cru) status in the 1855 Classification (Mouton Rothschild was the last and only addition in 1973), the chateau encapsulates the grandeur of its history.

Although the manor was completed well before 1855, the history of Chateau Margaux dates back to the 12th century when it was known as La Monthe de Margaux. The property was owned by various noblemen through the centuries. Serious winemaking began in the 17th century and by the beginning of the 18th century, one-third of its 265 hectares were devoted to viticulture. The size and the layout of the estate have remained basically the same since then.

Chateau Margaux quickly established its renown as a winemaker. In 1771, it had the distinction of being the first claret to be sold at Christieâ€™s. Thomas Jefferson, then the American ambassador to France and later the President of the United States, was a devoted customer (record shows that he bought the 1784 vintage amongst others). With the decimation of the nobility during the French revolution, the estate fell into disarray. In 1801, it was bought by Marquis de Colonilla who commissioned the leading architect of the day, Louis Combes, to build the magnificent building which now stands today. After he died, ownership changed hands many times until 1977.

The 1960s and 1970s were difficult years for Chateau Margaux and the then owners capitulated after several disastrous vintages in the 70s. After languishing on the market for over 2 years, a self-made Greek tycoon, Andre Mentzelopoulus, bought the property in 1977. Andre invigorated the estate by putting his not inconsiderable wealth to bear. There was a wholesale makeover, vines were replanted, new oak barrels were purchased, a new underground cellar was built, the chateau was completely renovated, etc.. Unfortunately, the architect of this remarkable turnaround died in 1980. His daughter, Corrine, assumed the mantle after his death. Today, the Mentzelopoulus family is in complete control of Chateau Margaux and with the talented Paul Pontallier (who came abroad in 1983) as its director, the vision of Andre can be said to have been fulfilled.

Today, about 80 hectares are under vine. The 4 varietals are planted, cabernet sauvignon (75%), merlot (20%), petit verdot (3%) and cabernet franc (2%). There is the flag-bearer, Chateau Margaux, followed by a second wine, Pavillon du Chateau Margaux and a small quantity of white wine, Pavillon Blanc du Chateau Margaux. A third red wine is being made to satisfy market demand but as of now, the name is undecided. The classical signature of Chateau Margaux is fullness with fragrance and subtlety. It is consistently one of the top 3 Bordeaux wines in every vintage since 1978 and its taste is synonymous with elegance.

As we toured the estate, we cannot help but reflect on the remarkable commitment of the people who have built it into what it is today. After a fascinating and informative tour of the facilities, we were met by Paul Pontallier who escorted us to the tasting room. Paul apologized profusely for missing our tour but explained that he just got off the plane from Brazil. Looking no worse for wear, he artfully guided us through the tasting. On offer was the 2009 Pavillon Rouge, the 2003 and 2008 Margaux. Although 2009 was rather light in colour, it shows weight and a purity of fruit. Its balance and refined palate is worthy of the grand vin. The 2003 and 2008 (which have just been bottled) provided an intellectual contrast. 2008 was rich in the nose with a lively perfume, the length was satisfying but it was rather austere. In contrast, 2003 was complex, intense and carries itself with ethereal grace. This is classical Margaux elegance.

Next stop was champagne and canaps on the steps of the manor itself. We met Paul's charming wife, Beatrice, who being an art historian highlighted to us the nuances of the chateau and its architecture. As the sun slowly fades into the horizon and a cool breeze settles in, we entered the chateau and were seated for dinner. The decor was French classicism at its apogee. Nothing was out of place. The cuisine was also classical French (simple yet elegant). There was a lobster salad and the main course was veal. It was accompanied by the 2000 Pavillon Blanc and Margaux 1996 and 1986. In fact, the wines served that night would provide more than sufficient grist for another article. A slight preview Paul preferred the 1996 (for its power and fruit) and I preferred the 1986 (for its subtlety and grace).

After dinner, it was time for cognac and cigars. There was lively conversation and I was amazed to find that all of us Hong Kongers were totally at home in a 19th century chateau in the middle of the French countryside. True to form, I could not resist grilling Paul on all things Margaux and he dealt with it with remarkable candour (notwithstanding that he must have been awfully jetlagged). To me, Paul is the persona of the bridge between the old and the new generation of Bordeaux winemakers. He has remarkable skills, experience and insight in winemaking. At the same time, he is articulate, worldly and urbane (in fact, he looks so debonair in his tan jacket that all the men were asking him who his tailor was).

As the night ended and we board our transport to return to Bordeaux, a thought sprang to my mind, would our van turn into a pumpkin at the stroke of midnight? I have chosen to preface this article with a quotation from a literary figure because he was also widely known for penning poignant fairytales. This visit was a fairytale came true ... and we indeed received far more than we gave.