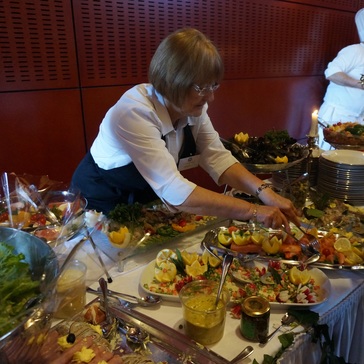 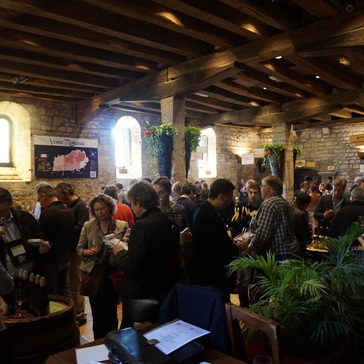 With the superb opening act at Chablis, one wonders what one would do for an encore. Apparently, the organizers of the 2014 edition of Les Grands Jours de Bourgogne had plenty of tricks up its sleeves. Firstly, they secured the cooperation of Mother Nature to ensure that every day of this week in March was basked in sunshine. Secondly, they chose the perfect locations as backdrops. Gentle slopes, undulating hills were the continual landscape that merged into the horizon. This set the stage for a marvelous cast of vignerons to showcase the fruits of their passion.

The days passed in a wine tinted blur. The big guns of Cote de Nuits came out on Super Tuesday with tastings in 4 separate locations. Going from north to south were tastings at Marsannay (with wines from Gevrey-Chambertin, Marsannay and Fixin), the historic Chateau du Clos de Vougeot (Vosne-Romanee and Clos de Vougeot), Chambolle Musigny (Chambolle-Musigny and Morey-St-Denis) and Nuits-St-Georges. The majority of the domaines was presenting their 2012 vintage which has just been bottled. 2012 was initially hailed by wine critics as a classical vintage for the red wines of Burgundy but with the passage of time, their enthusiasm became more tempered. Since participating domaines were restricted to presenting wines of the themed appellation at each tasting, this was a rare opportunity to compare like with like. Where else can one find a gathering of 32 top Echezeaux under one roof?

The tasting reaffirms our belief that vintage makes much less of a difference in Burgundy. It would be a very rare year when a top winemaker cannot present a fine offering from their stable of grand and premier cru’s. However, Burgundy remains a minefield because there are a host of domaines who continue to make indifferent wines. For 2012, you cannot go wrong if you manage to secure wines from the top producers, even at the affordable end of their range. Pausing here, we must confess that it is impossible to taste all the wines and there must have been many worthy offerings which we have overlooked.

Chambolle Musigny hosted its tasting in a restored 13th century barn. This beautiful building simply did not have the room to accommodate the hoard of thirsty visitors. We beat a hasty retreat after a quick sampling of a very fine Les Cras (premier cru) from Domaine Barthod and Domaine Hubert Lignier’s offering from Morey-St-Denis. Although we were looking forward to tasting the 2012 Clos de Tart, it would appear that Monsieur Pitiot, its winemaker, also wanted to escape the maddening crowd and we only found a single empty bottle standing a lonely vigil in his place.

To our relief, the stampeding herd has left for lunch by the time we set foot into Chateau du Clos de Vougeot. This magnificent building, which must be the most photographed site in Burgundy, is a fit setting for the best of Vosne-Romanee and Clos de Vougeot. We made good use of the slight lull in the proceedings to drink our fill. Although they are the less highly regarded of the grand crus, both Echezeaux and Clos de Vougeot from the top domaines made a very strong showing for 2012. Standouts Echezeaux included those from Domaine Meo-Camuzet, Comte Liger-Belair, Arnoux-Lachaux. Domaine Hudelot-Noellat also cemented its place in the top echelon with a spectacular showing of their precious crus, Richebourg, Romanee-St-Vivant, Clos de Vougeot, Les Suchots and Aux Malconsorts. Our greatest admiration and esteem is reserved for 2 outstanding lady winemakers, Anne Gros and Cecile Tremblay. We found Cecile sitting radiantly at her perch who is now expecting her second child. Her energy and verve are unmistakable and they are infused in her splendid wines, Vosne-Romanee Vieilles Vignes, Les Rouges (premier cru) and Echezeaux. At the other corner of the hall, Anne and her daughter tirelessly poured and served their grand crus to an unending crowd. Anne told us afterwards that she poured 30 bottles of her grand crus that day. Her Richebourg with its gorgeous fruit and femininity was easily the No. 1 wine from this whole week of tasting.

By dusk, we dragged our exhausted shells to the town hall of Nuits-St-Georges. We strolled through the half-empty stands as many of the producers have packed up and left. There was one stand which was still packing a crowd and after tasting their 2009 and 2012 Les Crots (premier cru), we understand why. These were round, rich and forward wines. The winemaker was young and erudite and we noted his winery, Decelle Villa, as one to watch.

Compared to the hectic day before, Wednesday was almost a day of rest. All 3 themes held their tastings under one venue, the exhibition centre in Beaune. This was a road less traveled and this is reflected in the sparse attendance. Nevertheless, this was the perfect venue to meander and mingle with the winemakers. This is the unglamorous side of Burgundy, winemakers who are struggling to make a name (not to mention a decent living). Here you would find (or be reminded) that there are beautiful expressions of chardonnay outside of Puligny and Chassange-Montrachet. Splendid value whites abound from Macon, Pouilly-Fuisse and Saint Veran from winemakers such as Rijckaert, Carrette, Corsin and Louis Chenu. For reds, we found Luc et Lise Pavelot making wonderful wines from Peranad-Vergelesses (look for their 2011 Ile des Vergelesses, premier cru).

On Thursday, we were back on the road driving to the little southern town of Mercurey. These hosted 2 tastings for upcoming winemakers and the wines of Cote Chalonnaise. This is again a welcome detour from the well-beaten track and engages you in a voyage of discovery. We were particularly impressed with a number of white wines from Domaine Dureuil-Janthial from Rully (Le Meix Cadot and Viellies Vignes) and Francois Raquillet from Mercurey (Les Velley). These wines match splendidly with the Michelin quality sit-down buffet laid out by the event organizers. As the old saying goes, you try harder when you are climbing to the top!