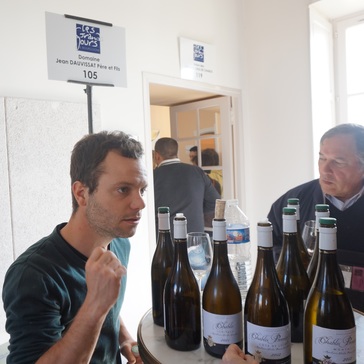 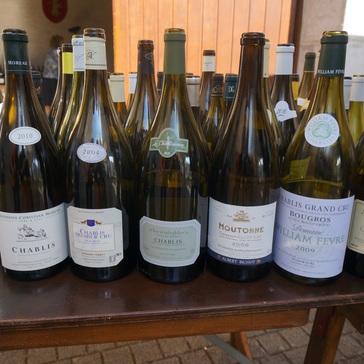 60,000… that is the number of different wines made every year in Burgundy. This number is unfathomable to many since Burgundy basically make wines from 2 main grape varietals, pinot noir for red and chardonnay for white and no blending is allowed (wine can only be made from one type of grape). This staggering number can only be explained by the concept of terroir and its main constituent, the land. By a quirk of nature which occurred million of years ago, the geology of Burgundy is maddeningly complex. Soil composition, elevation, direction of the slope varies from one plot of land to another. To put it simply, walking a few hundred feet in any direction would put you in a plot which has its own unique soil with differing exposure to the sun, drainage ability, etc.. A different vineyard yields a different produce. Added to the mix is the number of producers who own slivers of vineyards and growing grapes in their own way (for example, some like to harvest early whilst others like to harvest late and everything in between). With their bounty, they would make wine in their own way. Just a small plot of vineyard of less than a hectare may therefore yield several different wines and there are 27,600 hectares of vineyards in Burgundy. Multiply that by about 4,000 domaines (invariably small producers who own small vineyards making their own wines) and 250 negociants (bigger producers who both buy and grow grapes to make wine). This perpetuates the mystique of Bourgogne which beguiles its devotees.

So how do you get to know the wines of Burgundy? The short answer is you don’t. A very knowledgeable Burgundian teacher noted, “The more you learn, the less you find you know”. He did add that one should not despair because you do not need to unravel the mystery of Burgundy to enjoy it; you only need to drink it to learn to appreciate it. If this is true, then one would have discovered the fountain of knowledge at Les Grands Jours de Bourgogne.

This is a Burgundy extravaganza which takes place in the heart of Burgundy once every 2 years in March. About 1,000 domaines showcased their wines at the event which ran from Monday to Friday. The tastings were segmented into 15 themes, usually by reference to the area from which the wines hailed. Each “theme” is at a different location (except thankfully for Monday and Wednesday when the tastings were held under one roof). It starts at 9am and finishes at 5pm or when the last drop was poured, whichever comes first. It is an accomplishment in itself to attend all the tastings which we managed to do with the help of our trusty rental and GPS.

Once you arrived, you realized that getting there is the easy part. The sheer volume of bottles to be tasted is downright daunting. Each domaine presents their portfolio of wines for tasting. It invariably starts with a lowly bourgogne, followed by their village wines and then onto their crus. Given the miniscule production of their top cuvees, some did not offer them for tasting. However, the available array of premier and grand crus is more than enough to satiate any oenophile. A rough estimate is that no less than 8,000 wines were presented for tasting. It would simply impossible to taste them all. After tasting 100 odd wines each morning, palate fatigue sets in; not to mention your teeth taking on a permanent purplish tinge after a few bouts with the reds. It was hard work (but someone has to do it).

The journey started with the wines of Chablis which is the northern most part of Burgundy. Given its proximity to Paris, the area is known as the Golden Gates of Bourgogne. Since all the other events were held in locations which were about 90 minutes away by car, many did not make the journey on this first day. Their loss is our gain. It was well-attended but a far cry from the crush that we experienced at later events. There was a stand where grand crus from all the top producers were assembled for tasting. The domaines poured a variety of vintages including back vintages but 2011 and 2012 were front and center. The steely and crisp character of Chablis was on full display. 2012 generally showed well whilst the 2011 had just this light touch of green. True to form, the premier and grand crus from the right bank of Serein River exude that little extra power and richness when compared to those from the other bank. This was a master course for developing an appreciation of the nuances of Chablis’ terroir.

Everyone knows that the perfect food match for Chablis is oysters. To punctuate this statement, the event organizers managed to procure an endless stream of oysters from the cooperative representing producers from the Marennes Oleron territory. This territory on the Atlantic Coast of France is world famous for its Claire oysters (so named because it is cultivated in Claire ponds in that area). If you think Fine de Claire is good, wait to you try their top oyster, La Pousse en Claire, freshly shucked and washed down with a glass of chilled Chablis. And that is just the appetizer. You are then ushered into a buffet where the best local cuisine is on offer. A delicate puff pastry topped with escargot, a succulent chicken leg stuffed with ham - this was French country cuisine at its best. To ensure that you do not go thirsty, there is a free flow of cru class Chablis from magnums. Idyllic surroundings, sunny weather, gourmet food, a wine glass that is never empty... what a perfect overture!

Oh! I almost forgot. What wines stood out? If there are golden rules for identifying good Burgundy, it is location and producer. Since the top producers have the best locations, this reduces the formula to identifying producers. From the tasting, I was impressed with wines from William Fevre (the first family of Chablis), Long-Depaquit, Dampt, Defaix, Christian Moreau. And to share a little secret, I discovered a future star, Domaine Jean Dauvissat Pere et Fils. This family owned domaine is now run by the young and energetic Fabien Dauvissat. His wines are supple, complex and wonderfully expressive. Definitely one to watch.