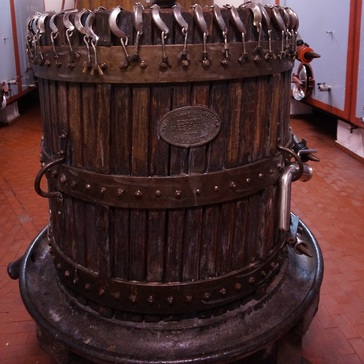 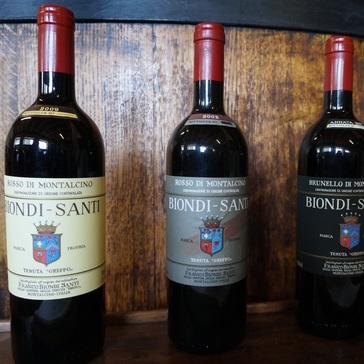 As the Biondi Santi estate recedes in our rearview mirror, our parting image is the two rows of towering stone pine trees flanking the narrow dirt path leading to its gates. These umbrella shaped pine trees which are native to the Mediterranean appear to be standing in silent vigil and as guardians to the great tradition of Biondi Santi. With the history and accomplishments of Biondi Santi, there is no backdrop which is more fitting.

In my travels as a wine writer, I have had the privilege and pleasure of visiting some of the most esteemed and famed wine estates in the world. However, until Biondi Santi, I have yet to visit an estate which can lay claim to having “invented” a wine and single-handedly creating an appellation. This is what the Biondi Santi family achieved with Brunello di Montalcino.

The winemaking history of Biondi Santi can be traced back to as early as 1869 when Clemente Santi was recorded as having won 2 silver medals for his red wine at an agricultural fair in Montepulciano (a commune in Tuscany). By the time Ferruccio, Clemente’s grandson, inherited his estates, he had acquired the passion and instincts to scale new heights in winemaking. Being the offspring of Clemente’s daughter and Dr. Jacopo Biondi, Ferruccio also united these 2 great names and the name Biondi-Santi was born.

Ferruccio’s vision was revolutionary for his time, the late 1800s. At that time, wine drinkers in the region favored a light, semisweet wine. Ferruccio went the opposite direction and looked to produce a wine that is forceful and age-worthy. From his estate vineyard, Il Greppo, he painstakingly selected and identified the best sangiovese grapes and adopted this clone for his wines. This clone was eventually identified by scientists as BBS 11 (abbreviation for Brunello Biondi Santi 11). The result was a full-bodied red wine made from 100% sangiovese after extended aging in large wooden casks. This was the Brunello (the local name for sangiovese) wine which the estate made continuously and in the same fashion since 1888, no other Brunello winery could make a similar claim.

His single-minded devotion to his beloved Brunello from Montalcino (a hilltop town and commune in Tuscany) resulted in his being anointed the “father” of sangiovese and the appellation “Brunello di Montalcino”. This accord with official records from the Italian Ministry of Agriculture which declared in 1982, after a detailed investigation, that Brunello is “a creation of Dr. Ferruccio Biondi Santi from Montalcino”.

Upon the death of Ferruccio, the tradition of Biondi Santi was carried on by his son, Tancredi. During his stewardship, Tancredi cemented the reputation of Biondi Santi and his own as the foremost enologist in Italy. However, given the limited production of their wines, it remained a well-kept secret for Italians until the late 60s. This changed overnight in 1969 when the Italian president served a 1955 Biondi Santi Brunello Reserva to Queen Elizabeth at a dinner hosted by him in London. As it was reported that the Queen enjoyed this wine, fame quickly followed. With fame came demand and other wineries joined the bandwagon and Brunello plantings increased almost threefold to 390 acres between 1969 and 1971.

Tancredi, as his father before him, groomed his son, Franco, to assume the mantle. In 1944 as the war approached their town, Franco assisted his father in walling off part of the cellar to protect their precious bottles from marauding Axis soldiers, thereby saving their 1888 vintage for posterity. This is a particularly apt anecdote because Franco is now known as the defender of traditional brunellos.

Fashion comes and goes and wine style is not immune. A traditional brunello takes at least 15 years before a reveal its purity and complexity. This youthful austerity makes the wine rather difficult to market. By the 1980s, many winemakers were advocating a more accessible wine. They wanted permission to blend their wine with merlot and syrah and to impart more oak notes by aging the wine in new barriques (smaller French oak barrels). Franco staunchly resisted these changes, arguing that this would result in their mimicking wines from the new world. With critics hailing this new style, the clamor for changes to the appellation rules grew. Franco outlasted this fad and when the tide turned, other producers voted not to permit other grape varietals in Brunello di Montalcino. For his tenacity and the string of iconic wines made under his aegis, he became a legend in the wine world.

When Jacopo hosted us at his estate in August of this year, his father, Franco, has just passed away earlier in the year. As we talked and drank, he seems entirely comfortable with being the master of this legendary estate. He was knowledgeable, charming and articulate. He looked and acted every part the scion of the first family of wine (if one is counting, he is the sixth generation). One would have thought that the passing of the torch was seamless and would not have guessed that much had been written about the rift between his father and him. It caused him to strike out on his own to launch wines under his own label of Jacopo Biondi Santi in 1991 and comments to the media that his father only preserved tradition but did not create. When I asked him about this, he chuckled and said that he now has the best of both worlds. He intends to maintain the tradition of Biondi Santi but at the same time, he can continue to express his own style of winemaking with wines under his own label [his flagship Sassoalloro is also made with the family clone (BBS 11) but aged in barrique and the 2009 vintage offers a fresh nose with a gentle and velvet palate]. However, he credited his grandfather, Tancredi, and not his father for teaching him the art of winemaking. One expects no less from men of such strong will and character, it is their similarity that makes them such uneasy companions. Nevertheless, I do not doubt that father and son have made their peace with each other.

Biondi Santi made 3 wines, the Rosso, an entry level wine from young vines of less than 10 years. This is followed by Annata from vines of 10 to 20 years of age. The final offering is their flagship, the Reserva, which are made from the best and oldest vines and is only bottled in outstanding vintages (the annual production is a measly 15,000 bottles). The latest vintages for the Reserva are 2001, 2004, 2006 and 2007. There is no Reserva for 2002, 2003 and 2005 and the juice is blended into the Rosso and Annata. We shared the 2001 Annata and 1997 Reserva on that afternoon. Both are superb wines with the hallmark elegance of Biondi Santi. Unsurprisingly, the Reserva is still remarkably young and remains slightly disjointed on the palate. Jacopo names 1997 Reserva as the best vintage in the last century but still too young and would need another 20 years of bottle age. He points to it as the proud bearer of the Biondi Santi signature, longevity.

With Jacopo, Biondi Santi has found the perfect helmsman. Like the unyielding pine trees that guard the estate, Jacopo stands ready to perpetuate the tradition of uncompromising winemaking at Biondi Santi. 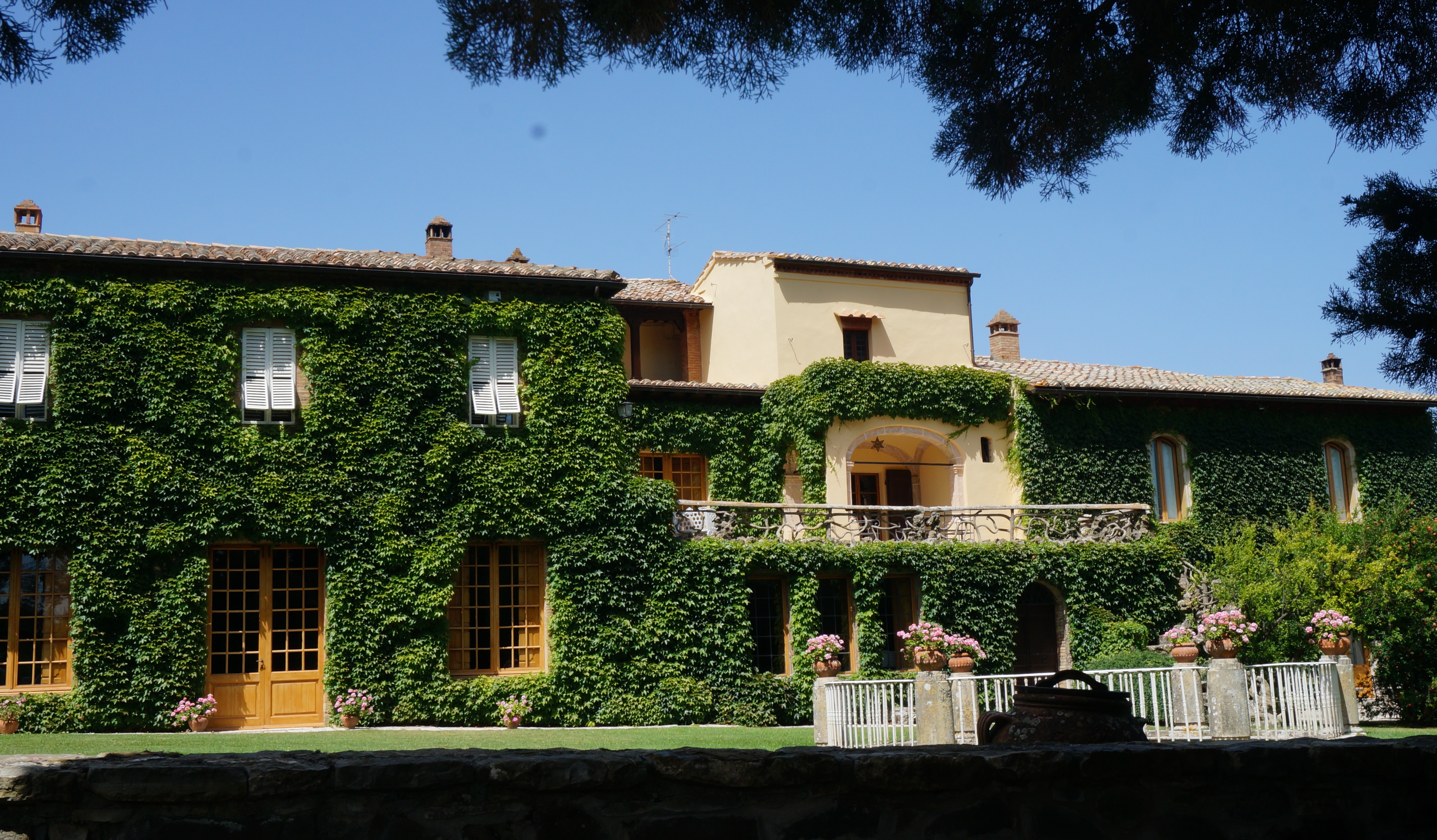