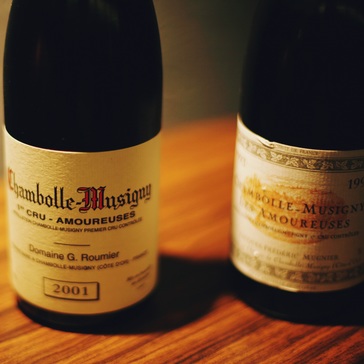 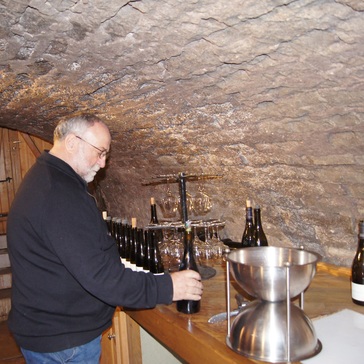 If not for its towering reputation, one would certainly drive past the road sign announcing Chambolle-Musigny without affording it a second glance. Alas, this tiny hamlet with no more than 350 inhabitants is a main attraction for lovers of pinot noir. Framed by a rolling hillside of vines, its stone farmhouses connected by a twisting network of narrow and sloping roads, it is home to some of the greatest domaines in Burgundy. From this tiny village, local growers would head to the surrounding vineyards to work their magical vines. Vines yielding such wondrous fruit that 26 vineyards had been accorded grand cru (2 vineyards) and premier cru (24) status.

A trio of homegrown domaines defines the excellence of their appellation with their grand cru bottlings, namely, Domaine Comte Georges de Vogue, Domaine Georges Roumier and Domaine J.F. Mugnier. In a place where vineyards are fragmented into tiny holdings owned by numerous growers, this trinity each owns plots in Musigny, Bonnes Mares and Les Amoureuses. Although Musigny and Bonnes Mares are the only 2 grand crus in Chambolle-Musigny, critics does not hesitate in hailing Amoureuses as being of grand cru quality. Many would say that Amoureuses would not pale in comparison with Bonnes Mares and indeed if price is a measure of quality, Amoureuses would be a superior offering because its price often exceeds that of Bonnes Mares. Amoureuses is often described as a worthy sibling of Musigny, which as its best is one of the greatest wines of Burgundy.

The greatness of Musigny lies in its kaleidoscopic aromas coupled with elegance, richness, intensity and length. It is also rare because annual production is about 38,000 bottles. Les Amoureuses matches its perfume, silkiness and finesse. If one were to split hairs to distinguish the two, it would be its slightly lesser length and intensity. Their similarity can be explained by geography, Amoureuses lie immediately downslope from Musigny. It occupies 5.4 hectares (half of the total area of Musigny) and hence, even less bottles (about 20,000) are available each year.

It is not hard to understand why Amoureuses is one of the most sought after wines in the world. It is alluring both on the nose and in the palate. It is undeniably feminine and exudes romance. It rewards the fortuitous suitor with a rapturous experience of the senses. And the name, Amoureuses, meaning lovers, says it all.

Although it certainly does not need it, it gained further fame when the Japanese manga, Drops of God, waxed lyrical about the wine and chose the 2001 Roumier Amoureuses as the “first disciple” (being the 1st of 12 great mystery wines to be identified by the two protagonists in a fictional contest). Acclaim and scarcity make this an expensive label (recent vintages run between US$250 and US$1,000 per bottle) but is still more affordable than Musigny. If you are a wine connoisseur and you happen to stumble upon a bottle in a store and the price-tag doesn’t floor you, grab it before it vanishes.

To get a glimpse behind the glamour, we went to visit one of 13 owners of plots in Les Amoureuses, the lesser known Domaine Amiot-Servelle. The genealogy of Amiot-Servelle represents a microcosm of how Burgundy estates evolve. Christian Amiot, the Amiot of Amiot-Servelle, came from a family of winemakers in neighboring Morey-Saint-Denis. The Servelle family, of which his wife Elisabeth is a member, owns vineyards in Chambolle-Musigny and Christian started working for them in 1980 when the estate was then known as Servelle-Tachot. In 1989, Christian and Elisabeth took over the reins and renamed the domaine Amiot-Servelle. The original Servelle estate had about 7 hectares (over 17 acres) with 7 premier cru sites in Chambolle-Musigny. In 2010, they managed to buy from the Amiot family a precious hectare of grand cru vines at Morey-Saint-Denis and Charmes-Chambertin thereby adding 2 grand cru wines to their portfolio. Typical of a small family domaine, it produces no more than 30,000 to 40,000 bottles per year (including a range of 7 entry level village rouge and blanc).

We arrived at their domaine on a May afternoon in a mood matching the weather. It was cold, wet and windy. We had a dreary lunch at a hotel/restaurant fashioned in the faux chateau style that is so beloved by American tourists. The chef and his help had to be roused and the food tasted like it was made whilst he was still slumbering. It is one of those dreadful tourist experiences that the French are infamous for. Our mood was not revived when Christian Amiot guided us through a trapdoor into his cellar. Even by burgundian standards, the cellar was quite Spartan. A line of opened bottles lied waiting on a wooden bench and Christian leaned back against it hugging his chest with his arms and observed us with hooded eyes. Given that Christian was a bear of a man, he cast quite an intimidating presence.

Trying to break the ice with the usual questions about the history and philosophy of the domaine did not work. His answers were a textbook example of polite minimalism. With the language barrier and the needed intervention of an interpreter, I was floundering and was looking to beat a fast retreat. With nothing to lose, I decided to wing it by asking a question which was rather politically incorrect in this neck of the woods, money. I asked him why he sells Amoureuses at such a low price and whether he was aware of the going rate on the market (which was multiples of his ex-cellar price). Apparently, he never bothers to look once the wine leaves his door. There followed a pretty lively debate of why he should care about pricing. My argument being that fetching the best possible price enables him to make the best wine possible because land, labor, French barrels all cost money. Also with the nascent China market being here to stay, there is no reason for him to be held hostage to the assorted middlemen which takes the lion share of the profits. From his answers, it is clear that making money matters much less to him than making a great wine.

As our conversations meander far and wide, we sampled his range of 2010 wines which he characterized as fresh and balanced. He said it was a vintage that appeal to the French because there is ample texture with no excess. From this tasting, Derriere la Grange (a miniscule quantity premier cru) and Charmes Chambertin stood out. He extolled his 2010 Amoureuses, which was sold out and not available for tasting, for its hallmark minerality and elegance. After making this remark, he abruptly disappeared into the storage area and returned momentarily with an unlabeled bottle which he opened unceremoniously and shared with us. It was his 2001 Amoureuses – simply delicious with layers of fruit which was subtle on the palate; in one word - it has presence. Since he did not even have enough of this wine to sell, it was a very generous gesture on his part and we felt overwhelmed by his hospitality.

As we took our leave, I shook his rough-hewn hand and felt its calluses. This was a timely reminder that he was a farmer who has devoted his life to his land. It is back-breaking work for which the reward is the artisan’s pride in his craft. In Christian Amiot, we have found the quintessential burgundian winemaker… one who strives to make the best wine that he can.