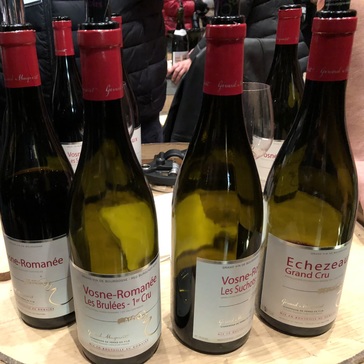 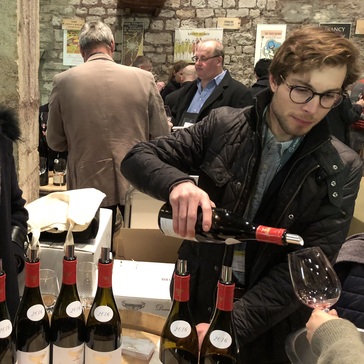 5 days, 11 locations, 1,000+ wine producers, @5,000 wines to be tasted... Welcome to the 2018 edition of the Grands Jours de Bourgogne. Although I am sprinting through the numbers, this is a marathon. To survive and truly appreciate this extravaganza which is held in the spring in the heart of Burgundy once every 2 years, you have to come prepared (just like you would for a marathon).

We began on Monday at Chablis, the Golden Gates of Burgundy, the traditional jumping off point as we traveled from north to south. Chablis is invariably an oasis as the hordes would set their sights on the offerings from Cote de Nuits and Cote de Beaune. The small town venue and atmosphere is cozy and presents a welcome opportunity to acclimatize yourselves to the awaiting frenzy. As in the past, our host has arranged for an oyster cooperative from Marennes Oleron to offer their plumpest morsels for pairing. If you have any doubt as to whether oysters are the quintessential match, you just need to savor a Pousse en Claire (the King of “Claire” oysters) with a swirl of Chablis. 2016 was a difficult year in which Chablis was struck by a trio of calamities, frost, hail and mildew. Production was halved (if you are lucky) but as one often finds, the fruit that survived made delicious wines. The standouts were Christian Moreau (particularly Les Clos and his special cuvee 2015 Clos des Hospices dans Les Clos), William Fevre (as expected), Pinson and Servin (which appears to have been rejuvenated with Marc Cameron, a feisty Aussie as its manager). A budding talent to watch for is David and Arnaud Lavantureux who as the 2nd generation has assumed the reins at the family domaine, Roland Lavantureux.

We then moved on to Super Tuesday. In past editions, this was the day for tasting the big guns from Cote de Nuits. This year, they made a welcome switch with Cote de Beaune and we tasted the wines from vineyards in the 20 kilometres stretch from Maranges (in the south) to Aloxe-Corton (north of Beaune). A further convenience came with these tastings being hosted in 3 rather than 4 strung out venues as in the past. This allows for a relatively smooth transition from the whites of Meursault to the reds of Pommard. Our day began at Leproserie de Meursault a historic limestone building which started as a hospital for lepers, who says that the French does not have a dark sense of humor. Living up to his billing as the ambassador for Meursault, Dominique Lafon anchored the proceedings with a showing of his 2015 Clos de la Barre and premier cru Les Charmes. With his 2016 range from bourgogne blanc to Perrieres, Jean-Baptiste Bouzereau of Domaine Michel Bouzereau reaffirms his position and my belief that he is a grandmaster of the Meursault terroir. Some lesser known names who impressed included Domaine Boyer-Martenot with their 2016 Charmes and Perrieres and Domaine Matrot with their premier cru Blagny 2014 and 2015 and Charmes 2016.

By 10 o’clock, the herd has arrived and we beat a hasty retreat to the hills of Corton. I always find this to be the most difficult tasting to attend. The venue is not very accessible and exhibitors are scattered in a warren of rooms. To compound the problem, only the wines of Corton are presented and this means that each exhibitor would most likely be showing a white Corton-Charlemagne with a couple of grand cru reds. It is extremely distracting to have to rinse your glasses to switch from white to red and to repeat it at each stand. I would simply do all the whites and retrace my route to try the reds but that is also quite tiring given the crowds. There is no doubt in mind that the wines would be better presented and received at a more suitable location (Palais de Congres immediately springs to mind). Lament aside, we tasted a beautifully crafted Corton-Bressandes with our old friend Follin-Arbelet. We also took notice of Domaine Dubreuil-Fontaine who captivated us with a stylish range of grand cru reds, Perrieres, Bressandes and Clos du Roi.

We spent the afternoon at Palais de Congres, a cavernous exhibition hall on the outskirts of the town of Beaune. What it lacks for in terms of charm is more than made up for by its airiness and space (and ample parking spaces). Given the ever increasing number of exhibitors and visitors, this is by far the most practical venue. We continued with whites from the Saint Aubin, Puligny- and Chassagne-Montrachet. Although less well-represented by growers from these established communes, there were certainly enough there to keep us busy. We tasted with Marc Colin from Saint Aubin and right next to him was Joseph Colin who has left and gone his own way (although there is nothing to suggest that the split was anything less than amicable, I didn’t see any bantering between them during lulls). Unfortunately for Joseph, his first vintage 2016 was a baptism by fire as he lost 60% of his fruit due to foul weather. His total production was reduced to about 1,800 bottles and he had to blend several plots to make 300 bottles of a wine which he aptly named Compendium. His remaining production was 1,200 bottles of premier cru Sur le Sentier du Clou and 300 bottles of En Remilly. Good wines if you can find it. I also made a note to keep an eye on Domaine Jean Chartron. The Chartron family has an illustrious history in the region but has somehow lost its way. Jean-Michel, representing the 5th generation, is determined to revitalize the domaine and with its legacy of peerless plots including some which are exclusively owned by the domaine (monopole in Clos de Cailleret, Clos de la Purcelle and Clos de Chevaliers in Chevalier Montrachet), how can one doubt him.

On Wednesday, we were back in Palais de Congres with the wines of Macon, Saint-Veran and Pouilly-Fuisse. Great wines at very reasonable price points that are still looking for some love. There is plenty of excitement from Pouilly-Fuisse because 22 plots shall be granted premier cru status in 2018 (well-deserved judging from the wines that have been made there). Thursday is traveling day as we drives south to taste the wines of Rully, Givry and Mercurey. Again, under-appreciated wines. More regrettable is that I have no space in this article to delve into these regions.

Red Friday quickly descended upon us. This is the day that everyone has circled in their diary, to taste the very best of Cote de Nuits. We started with Vosne-Romanee, then Chambolle-Musigny and Morey-Saint-Denis and ended at Gevrey-Chambertin. Vosne-Romanee invariably steals the limelight because save for a reticent few, all the winemakers from this commune would band together to present their best wines. For example, Richebourg from the Gros domaines (A-F, Anne, Frere et Soeur). My stars are Gerard Mugneret (with his newly designed label), Cecile Tremblay, Georges Noellat (no surprise) and the newest Noellat, Domaine Michel Noellat. To my palate, the 2016 Vosne-Romanee and Gevrey-Chambertin show better than Chambolle-Musigny. From Gevrey, I particularly like the wines of Perrot-Minot, Rossignol-Trapet and Trapet. A new discovery for me is Domaine Pierre Gelin. Although I cannot do justice to everyone, it would be remiss of me not to mention my favorite, Domaine Launay Horiot. Not only is he attracting the accolades of critics (Allen Meadows just came out again with stellar scores for his 2016s Pommard, Les Rugiens-Bas (93), Latricieres-Chambertin (94) and Chambertin (95), he is also attracting crowds of wine lovers to his stands. Please support your local winemaker. 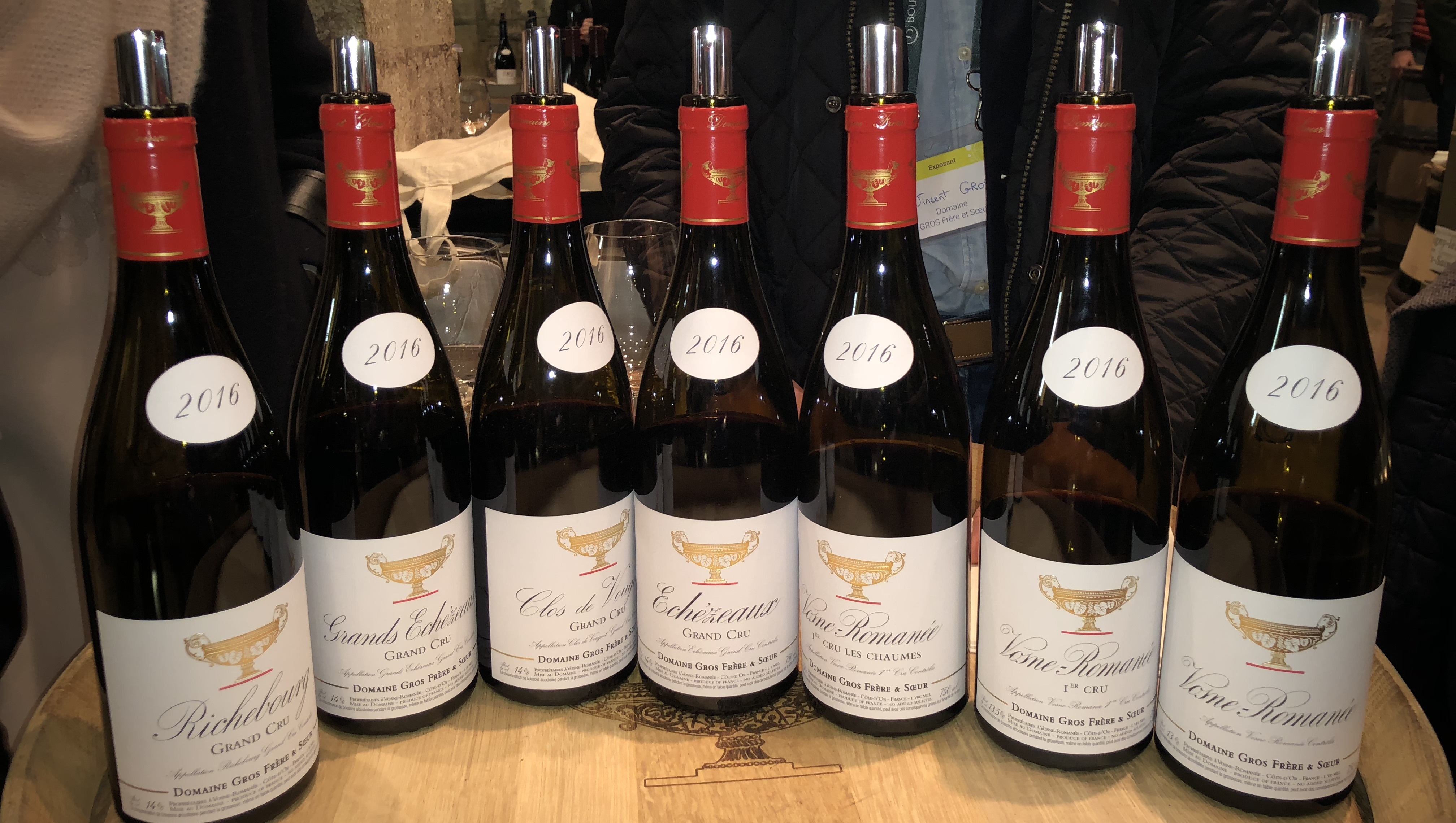