Back in the Cellars – Domaine Leroy (Part II) 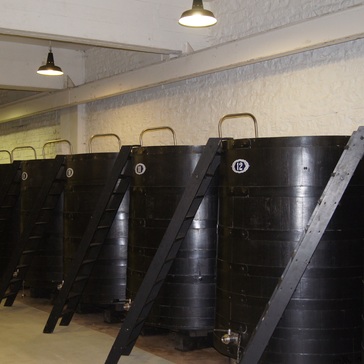 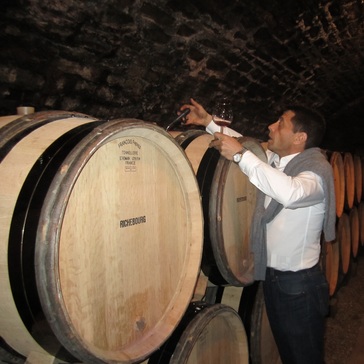 If the world is a stage, then the biggest stage in the sphere of Burgundy is located at Vosne Romanee. Legends, superstars, icons; call them what you may, they have all gathered here. Even to the uninitiated, their names inspire awe... Henri Jayer, Romanee-Conti, La Tache, etc.. Clive Coates, the renowned English wine critic, calls it “the greatest Pinot Noir (the grape from which red burgundy is made) village on earth”.

Vosne Romanee is a quaint and quiet village located about equidistant between Dijon and Beaune (two of the biggest towns in Burgundy). It encompasses 2 communes, Vosne Romanee and Flagey-Echezeaux. There are 8 grand crus covering 75 hectares (750,000 square metres) and 14 premier crus covering 58 hectares (580,000 square metres). This yields an equal amount of grand crus and premier crus each year, about 300,000 bottles of each. In addition, there are another 600,000 bottles of village wines for the common folk.

Since the Vosne Romanee crus are some of the most sought after wines in the world, there is never enough to go around. The top grand crus are parceled out on an allocation basis, in other words, everything that is available from each year would be gobbled up by merchants and then meted out to their best customers. Good luck trying to get your hands on a bottle of Romanee-Conti (about 5,400 bottles made annually) or Leroy Richebourg (less than 3,000 bottles available for 2011). This scarcity factor has driven the prices of these wines to astounding heights and serves to feed the mystique and allure.

Undoubtedly Madam (which we all end up referring to her as during our visit) would find it rather unimaginative for the writers to keep comparing her domaine to that of Romanee-Conti. However, comparisons are inevitable. Madam left Romanee-Conti in a storm but remains its co-owner. She helped fashion the wines of Romanee-Conti into the legend that it is today. Their wines are from vineyards in Vosne Romanee (their only departure being a wine from the Corton area which saw its first DRC vintage in 2009). She now makes her wines a stone’s throw away from her old haunts and from vineyards in the same area, Richebourg and Romanee-St. Vivant (grand cru), Les Beaux Monts and Les Brulees (premier cru).

In terms of fame, DRC is unrivaled. No one would brook dissent that they made superlative wines but so do a number of other domaines. What has helped propel DRC above the rest are other more tangible factors. More than one wine critic has described the wines of Burgundy as a minefield. To many, it is almost impenetrable. There are thousands of producers and each would easily produce 10 different wines. You would have the same domaine producing wines from grand cru (the very best) to the generic (the very common) and you can only distinguish it from a careful reading of the label (if you know what to look for).

DRC has miraculously escaped this quagmire. Its portfolio of basically grand cru wines only reduces the likelihood of dilution of quality. Although it does produce a premier cru wine, it is not made every year and when it is made, is made in negligible quantities. It is the proud owner of two monopolies, that is, vineyards that are owned by them in its entirety, Romanee-Conti and La Tache. If you see a label with the words “Romanee-Conti” or “La Tache”, it could only be from DRC. That gives it clear brand identification. Simply put, if you buy a bottle with a DRC label, you would not have to worry about its quality or perceived value.

Leroy would be the feisty new kid on the block. It doesn’t have any monopolies but it has stakes in all the poshest neighborhoods, Chambertin and Latricieres-Chambertin in Gervey-Chambertin, Musigny in Chambolle-Musigny, Clos de Vougeot in Vougeot, Clos de la Roche in Morey-St. Denis, etc.. The overwhelming reputation of DRC can be a burden. It just takes away that bit of adventurousness and makes one just a tad reticent. One clear example is that there have been no new additions to its vineyards until a small piece in Corton in 2008.

On the other hand, Madam is no less than audacious. She has her own particular and unique vision and she pursued it with verve. She has continuously added vineyards to her portfolio. She is obviously oblivious to classifications because she is making wines across the whole spectrum from grand cru, premier cru to village wines. She is entirely confident that she can fully exploit the terroir of each of her holdings and make it punch above its weight. If you are looking for an example of sheer boldness, you do not have to look back further to 2004 where she declassified all her grand cru red burgundies to village because she felt they were not good enough (ouch, that must have hit a hole in the budget!). As a result, Madam created the most expensive village wine in all of burgundy in 2004 and it is still a bargain (not that you can find it). In terms of prestige, DRC has the obvious edge but in terms of pricing and sheer quality, Leroy does not have to take a backseat. Leroy and DRC are true heavyweights a la Muhammad Ali & Joe Frazier and with them, the world of wine is so much richer.

With these thoughts, we followed Frédéric into the subterranean levels. For the number of wines that was made by the domaine, one would have expected a substantial operation. On the contrary, everything was housed in a modest area under one roof. Since the house was empty on this Friday afternoon of our visit, it felt even smaller. It was like having stumbled into a house where the owners just happened to make wine. However, once we entered into the vat rooms, we stood transfixed. Against each wall was a line of wooden vats. Each vat has a number plate and was assigned an individual number. Frédéric told us that the same vat would be used for each parcel every year. For example, Vat #3 was for Musigny. This was where greatness was created.

Next stop was the treasure cave. This was where the barrels after barrels of vinous treasure lied in wait. Frédéric was equipped with his wine thief and we each had our glasses. Again, one cannot help but be reminded that the numerous plots owned by Madam does not yield any great volumes. The wines of Leroy are produced in minuscule quantities and there is simply no reason to bemoan such extravagant prices (this is the law of supply and demand in action). Each barrel yields about 290 bottles and for each plot, the number of barrels can be count with the fingers on your hands. For example, there are only 2 barrels of premier cru, Nuits-St.-George, Au Bas de Combe (less than 600 bottles).

In quick succession, we tasted the whole range of Domaine Leroy from 2011. The village Pommard ‘Les Vignots’, the premier cru ‘Au Bas de Combe’, ‘Les Beaux Monts’ from Vosne Romanee, ‘Santenots du Milieu’ from Volnay and then the grand crus ‘Corton Renardes’, ‘Romanee-St. Vivant’, ‘Richebourg’, ‘Clos Vougeot’ and ‘Chambertin’. Truth be known, the wine was so fine and accessible that many of us just drained our glasses and could not bear to spit or return the remnants from our glass to the barrel. Although these are still early days for the wines, each was showing remarkably well. The purity of fruit transcends the whole range. Of particular distinction is the Chambertin, rich fruit, fragrant and lingering nose, power balance with elegance, truly complex. These are magic captured in a glass.

Although we did not have the pleasure of Madam’s company on this visit, we all felt her presence in the remarkable wine that she has crafted. In our first article, we referred to the inscription at Leroy which said “wine is inspired by the cosmos, it tastes of the earth”. There is an accompanying inscription on the other side quoting Salvador Dali who said “he who knows how to taste wine never again drinks wine but tastes its secrets”. When we drink Madam’s wine, we felt that she was sharing the secrets of her beloved vineyards with us.