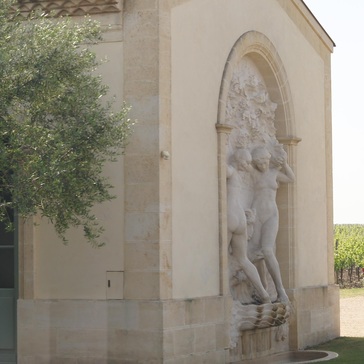 It has been said that if a golfer is invited to play at Augusta National Golf Club, the home of the Masters, he should immediately hop on a plane and go. The same can be said if you are a wine lover and are given the opportunity to visit Chateau Petrus. In May, I was offered the rare privilege of a tasting at Petrus. I brought along some friends (on this occasion, I found that I had many friends).

We arrived in Bordeaux on one of the warmest Mays on record. The mercury hovered at around 20 degrees and the sun was shining brightly. On a brilliant Friday morning, we arrived at the gates of Petrus brimming with excitement. We were greeted by Elisabeth Jaubert, ambassadrice (ambassador) for Petrus. We took a brief stroll from the gates to the vines. A hush descended upon us as we contemplated the tableau before us. Framed against an azure sky was a sea of green fluttering in the breeze. One can understand how a wine of such dazzling artistry can be drawn from this canvass!

Elisabeth explained to us that this was the earliest that the vines have started to fruit. The vines were fully leaved and small droplets of the precious merlot grape have appeared. This was in contrast with 2 years ago when the vines were bare at the same time of year. At this rate, it is expected that harvest may begin as early as late August, the earliest start since the turn of the century.

Petrus has single-handedly propelled Pomerol, the appellation in which it is located, and the merlot varietal into folklore. One can trace its origins back to 1837 when they were already fashioning outstanding wines, as evidenced by winning a gold medal at the Paris Exhibition of 1878. The Arnaud family owned Petrus from the beginning. Madame Edmond Loubat started acquiring parts of the property in 1925 and by the end of Second World War, she has acquired the whole of Petrus. Typical of wine estates in Pomerol, its size was small and covered a modest 7 hectares. In 1969, Petrus increased to its present size of 11.4 hectares by acquiring an adjacent parcel from Chateau Gazin.

Elisabeth attributed the greatness of the wines of Petrus to mother nature. Although she is entirely too modest, the uniqueness of its soil composition is a key determinant. Petrus lies on the highest point in Pomerol. The elevation is barely discernable with the naked eye. Some called it a plateau, other calls it a terrace. In fact, it is no more than a mound. It is almost beyond comprehension that this mound of dirt makes the essential difference.

The plateau is about 20 hectares and Petrus not only owns the lion share but also the choicest part, where the soil composition is almost pure clay with an iron-rich base. The other vineyards which surround it has much more gravel and as the land slope downwards, the soil becomes more sandy. Petrus is literally the jewel of the crown.

Petrus has this unique terroir. Just as important, the owners and winemakers recognized this terroir and were prescient enough to complement this bounty from nature with immaculate winemaking skills. The philosophy is minimum intervention but maximum care. The vines are tended to with infinite care and the wine is virtually handmade. One can say that this is to be expected when Petrus commands such astounding prices but this was the way the wine was made even when money was scarce.

When we were there, there were construction cranes and a section of vines has been reduced into dirt. Elisabeth explained that they have removed the section for planting cabernet franc to make way for a new winemaking facility because they were not happy with the quality of the grape being grown there. In other words, Petrus would not be blending their wine with cabernet franc and would be 100% merlot from 2010 onwards. This really is the exclamation point for Petrus. They have such great confidence in their terroir and winemaking techniques that they are willing to rely solely on their signature grape, a notoriously fickle varietal to grow. Bravo!

Although Petrus is deep in tradition, they are ready to adopt modern technology if it enhances their wine. They are now using a high speed optical sorter. Grapes that are harvested are placed into this sorter. By using optical technology, grapes of the right size would be selected at a speed of 80 kilometers per hour. Since sorting must be done as fast as possible to preserve the freshness of the fruit, this sorter neglects human error whilst vastly increasing the speed of selection. In this way, Petrus represents the harmony of nature, man and technology.

After a fascinating tour of the vines and the winemaking facilities, we headed into the tasting room for the main event. On the tasting table were a roll of gleaming crystal glasses and an unlabeled bottle. Elisabeth announced that we shall be tasting the much-lauded 2010 vintage. This vintage had not been bottled yet and we were tasting a barrel sample. Robert Parker has just given it a rating of 98 to 100. Although the nose was still closed, it was a powerful and concentrated wine with great fruit and depth. It was an alluring wine with massive potential for improvement with bottle age. Although perfection is hard to attain, this wine would be close to it.

There were many questions for Elisabeth and she answered each of them with precision and passion. She was asked about the consistent high quality level of Petrus and she simply stated that if the wine is no good, it would not be made. For example, no Petrus was bottled in 1991. She was asked about vintages which have lesser renown and the simple reply was that they were still marvelous. She recalled approaching a 1994 with very low expectations but found that it had evolved into a fabulous wine. For the newest vintage available in the shop, 2007, she described it as “lace” whereas the 2008 was described as “velvet”. Great wines in different ways.

After the tasting was finished, we lingered to take pictures and none of us could bear to leave. However, our solace is that we can always recapture this magic from a bottle of Petrus. It is quite expensive but when one views it in the context of being one of the greatest wines in the world (for me, there are only 2 must drink wines, Petrus and Romanee Conti), then it is a bargain!