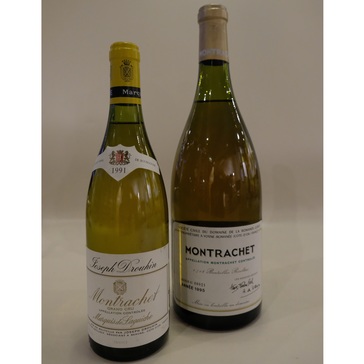 How to spot a fake? Not a fake wine but a fake wine expert. The simple test is to just ask him about the difference between Montrachet and Le Montrachet. This should stump him. Before we answer this question, let’s talk about this wine.

To begin with, it is pronounced “MOAN-rah-shay” (if in doubt - just skip the “t”). Secondly, although it was historically called Le Montrachet, the common parlance is to just call it Montrachet.

What is the mystique of a bottle of Montrachet? It is simply the best white wine in the world. Those who drank and rhapsodized about it span the eons. Alexandre Dumas, the prolific French penman of swashbuckling adventures, described it as a wine to be drank “on bended knee, with head bared”. Thomas Jefferson, the American president and renowned wine lover, observed that a Montrachet costs 8 times that of a good Meursault in the 1780s. Dr. Lavalle whose classification of burgundy vineyards in 1855 served as the foundation for the establishment of the official grand cru and premier cru designations in the 1930s grandly pronounced that “whatever the price, (you) will never have paid too much”.

The noted British wine critic, Clive Coates, says that it is, or should be, chardonnay at its most perfect, the slowest to mature and the longest lived. To him, there is nothing remotely comparable. Without mincing his words, he pronounces that it is an enormous step up from Chevalier Montrachet, even if Chevalier is already twice as good as the Batard and the Bienvenues.

What makes it so other-worldly? The first and foremost ingredient is the terroir of the site. It is located at the ideal elevation (not too high, not too low) of a gentle slope which is fully exposed to both the south and the east. The sub-soil is an irreplicable mixture of thin, marly limestone interbedded with marls and trace minerals. This quirky creation of nature allows the fruit to harness the very best of the elements (drainage, exposure to the sun, protection from the wind, etc.). That’s the part played by nature.

As to nurture, it has the insurmountable advantage of being able to bring out the best in winemakers. Having been revered as an outstanding vineyard site since the 1700s, those who have been privileged to make wine from its fruit has tended to the vines with loving care. The king’s ransom that you paid for each bottle ensures that the winemaker has a powerful commercial incentive to elevate their craft. Given that Burgundy is rift with rivalry, familial or otherwise, having a Montrachet in your portfolio confers the ultimate in bragging rights.

The total area of Montrachet is 8 hectares of which slightly over half lies in Puligny-Montrachet (4.01 hectares) and the other half lies in Chassagne-Montrachet. From an aerial view, it resembles an elongated rectangle. 17 lucky owners share this precious land from which it yields about 40,000 bottles in total in each year (weather permitting). This scarcity has propelled prices to the stratosphere.

Having seen these prices, one may despair in thinking that one may never be able to taste this nectar. This may not necessarily be the case. Although it is fair to say that one could only dream of drinking Montrachet from Leflaive and DRC. It is not only expensive but very hard to find. DRC produces about 3,600 bottles every year but Leflaive produces less than 600. You can also forget about scoring a Montrachet from 2016. Given the inhospitable weather, the yield was so low that 6 owners (Domaine Leflaive, DRC, Domaine de Comte Lafon, Domaine Guy Amiot et Fils, Domaine Lamy-Pillot and Domaine Fleurot Larose) had pooled their grapes and for it to be vinified at Domaine Leflaive. But this would only result in a microscopic 600 bottles. If shared equally, there would be only 100 bottles from each of these domaines… the ultimate rarity!

However, it is not entirely grim. There are several winemakers who are making great Montrachet from their plots and their prices are accessible (relatively). Each bottle from them is their very best and you are far less likely to be disappointed (compared to any other grand crus, white or red). Domaine bottlings from Marc Colin, Blain-Gagnard, Fontaine-Gagnard, Bouchard and Drouhin (Marquis de Laguiche) are well worth looking for (either for drinking or cellaring). A non-acclaimed vintage such as 2013 would only set you back about HK$5,000. Not exactly loose change but certainly not exorbitant for the opportunity to sample the best of the best.

If you have the urge to splash, try my favorite, Domaine Ramonet’s Montrachet, which weighs in north of HK$15,000. It is pure magic in a bottle!

Apart from these Domaine offerings, several owners sell fruit to various negociants (merchants). Baron Thenard, an owner of 1.84 ha (a whopping of 23% of the total area) previously sold their bulk of their fruit to negociants and did not start bottling their own Montrachet until after 2008. They continue to supply to various merchants including Remoissenet in addition to now having their own label (sold at inexpensive prices but they tend to underachieve). Boillerault de Chauvigny provided fruit to Louis Latour, Louis Jadot and Olivier Leflaive. Therefore, you would find a smattering of offerings from negociants (the word “Domaine” would not appear before the name of the maker in these labels). Although the old caveat is that merchant bottlings are inferior to domaine offerings, this is far less applicable to Montrachet. The difference has been further blurred by domaines which own vineyards but not Montrachet. They buy fruit to bottle in addition to making wine from their own grapes (a hybrid domaine/negociant). Henri Boillot and Etienne Sauzet, being this hybrid, offer a constantly outstanding Montrachet from vintage to vintage.

If there is a real caveat, it is to read the label carefully before you buy. The real McCoy would have a label that reads Montrachet only or Le Montrachet (from purist). The words “Puligny” and “Chassagne” should not appear (which could be denoted anything from a village to a grand cru wine from the communes Puligny-Montrachet and Chassagne-Montrachet). The word “Montrachet” should also not be preceded by Chevalier, Batard, Bienvenues or Criots-Batard. They are from grand cru plots which abut the Montrachet plot but it is not Montrachet.

A final accolade, and my personal favorite, is a quotation from a French wine writer in 1728, roughly translated as “this wine has qualities which neither the Latin nor the French language can express… the sweetness… the delicacy and excellence”.

The answer : Montrachet is the wine made from fruit grown in that part of the grand cru vineyard which lies in Puligny-Montrachet and the Le Montrachet is from the adjoining side in Chassagne-Montrachet.