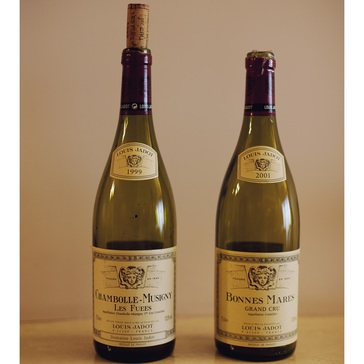 For many, the wine of Burgundy is a riddle and in Louis Jadot, those frustrating complications are at the forefront. It is both a negociant (a wine merchant who does not own the land from which the grapes are grown but bottles the wine under their own labels) and a domaine (a winemaker who makes wine from grapes grown on land which they own). Under the flag of Maison Louis Jadot, there are 4 domaines, Domaine Louis Jadot, Domaine Gagey, Domaine des Heritiers Louis Jadot and Domaine du Duc de Magenta. Together they control over 150 hectares of vineyards spread throughout Burgundy and its famed Cote d’Or. From their own land, and from long-term contracted growers, they bottle at least 20 grand cru wines and makes wine from over 100 appellations.

Its ubiquitous yellow label spotting the head of Bacchus, the god of wine, can be found gracing 150 different wines from a single vintage. You can find their wines in the supermarket selling for less than HK$100 or as strictly allocated treasures in the ritziest wine shops with price tags well north of HK$2,000. To the unwary, this dizzying array of labels and price points makes a selection unfathomable.

A quick reminder for the uninitiated, the quality of Burgundy is defined by its classification as grand cru (the best of the best), premier cru (one step down from grand cru) and village (identified by the commune which produced the grapes) to the generic (identified by the general region, e.g., Bourgogne blanc). For grand cru and premier cru wines, the only criteria is whether the vineyard from which grapes are grown and made into wines are classified as grand or premier. Therefore, the better Burgundies are differentiated by the name of that little plot of land from which the grapes are harvested and its ranking, something which is basically set in stone.

A simple rule of thumb is to see whether the words grand cru or premier cru appear on its label. For the Jadot stable, the presence of either of these words is a pretty good assurance of quality. If you do not mind burdening yourself with more trivia, knowing the name of their top premier cru sites would narrow down your choices. Highly regarded premier crus include Les Fuees, Les Amoureuses, Clos St. Jacques (red) and white wine from Charmes, La Garenne, Les Referts.

Another tip which may be helpful is to differentiate between a negociant and a domaine bottling. The conventional wisdom is that a domaine bottling should be preferred because the product is controlled by the winemaker from end to end. For Jadot labels, the words Domaine Jadot would appear on the label if it is from the domaine (the 2 words are framed in a small rectangle at the bottom of the label). For negociant bottlings, it would only say “mis en bouteille par” Louis Jadot. If the word Domaine does not appear anywhere in the label, it would mean that the wine is a negociant bottling and this applies to most Burgundy wines.

Jadot is the single most dominant wine operation in Burgundy, weighing in with a colossal annual production of almost 830,000 cases. The typical Burgundy domaine would not make a fraction of 800,000 bottles; a production of this number in cases is staggering. The immediate question that comes to mind is how this commercialism (its owners are its American importers, Kobrand) is compatible with quality. We found some of the answers were found when we visited its facility in Beaune.

It was a wet and windy morning in May that we drove through the sleepy streets of Beaune in search of our destination. The neighborhood that we found ourselves in was nondescript and could have been part of an industrial park in any city in the world. Our address had a spacious parking lot fronting a low-slung building, again, nothing particularly remarkable. We quickly entered to escape the elements and were greeted by Mr. Sigfried Pic, their congenial export manager and our guide for the visit.

First stop is at a topographical model of Cote d’Or where holdings of Jadot can be located by points of light. Sigfried pointed out that Jadot has access to the most extensive collection of vineyards in Burgundy, either by outright ownership of the land or through long-term supply commitments from other landowners. In a parochial community governed by a web of inter-related interests and rivalries, this could only be achieved by deep-rooted connections backed by ample financial resources. So this was the first part of the equation, their ability to secure a consistent supply of prime grapes to make their ocean of wine.

The next clue is readily apparent when we stepped into the vinification facility. It was an expansive circular arena dominated by a podium under a skylight at the centre of its cathedral-height ceiling. The podium is surrounded by open-top wood fermentation tanks of various sizes. Ringed around the edge of the room were wood barrels and stainless steel fermentation tanks. The mixture of the muted lighting with the chestnut wood of the domed ceiling emits an aura of airiness and serenity. The practical side was that its size allowed all their grapes to be assembled and vinified under one roof. This was a perfect synthesis of man and nature and is a testament to Jadot’s philosophy of making wines of beauty and harmony.

The final answer can be found in the barrel room in the lower levels which can house 6,000 barrels. Here we were guided through a barrel tasting of the 2011 vintage. Since the barrels of reds have just been moved, we had to content ourselves with a selection of the whites. Given that I have always been partial to the white burgundies of Jadot, it was not unwelcome. It included Auxey-Duresses, the premier crus of Savigny-les-Beaune Clos des Guettes, Beaune Grèves, Meursault Charmes, Chassagne-Montrachet Les Caillerets, Puligny-Montrachet Clos de La Garenne, Puligny-Montrachet, Les Referts and the grand cru Corton-Charlemagne. Since these are early days for the wines, we are looking at its potential. The general consensus is that these wines are obligingly fresh and fruity and can be drunk young. What stood out were Greves, La Garenne and Corton-Charlemagne with its depth and complexity and beguiling honey notes. Apart from being a true pleasure, it was a milestone tasting because this would be the last vintage of Jacques Lardiere, the legendary winemaker for Jadot who retired at the end of 2012 after 42 vintages.

The tasting was rounded off by several earlier vintages. From 2007, we had the Savigny-les-Beaune Clos des Guettes, Beaune Boucherottes, Pommard Rugiens (all premier crus), 2006 Gevrey Chambertin Lavaux St. Jacques, Corton Pougets (grand cru) and 2004 Beaune Grèves. The class of this tasting was Lavaux St. Jacques with its richness and Corton Pougets for its elegance.

Although the fashion for Burgundy is small-growth and cult domaines, Maison Jadot is a unique example of how a giant can embody the artisan spirit of making wine of the highest quality and precision.