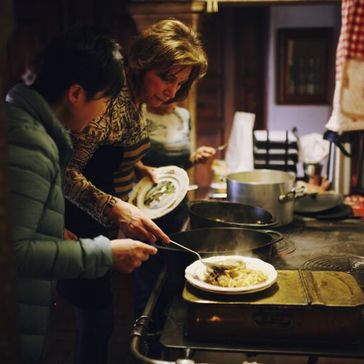 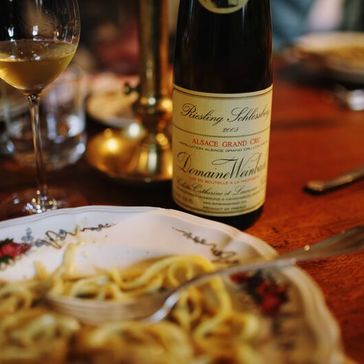 Alsace is renowned for its tradition of hospitality and proudly shares with visitors their joy for life – joie de vivre a l’alsacienne. The Fallers of Domaine Weinbach personify this spirit and their guests invariably can expect a warm and generous welcome. We visited the home of the Fallers and their domaine on an overcast September morning. The former monastery was framed by a sea of verdant vines which reached into the surrounding mountains. Beds of roses lined the gravel courtyard and an ancient well stood lonely vigil in the corner. Although the skies were gray and sullen, it merely accentuated these fairytale like surroundings. Tearing ourselves away from this pastoral milieu, we presented ourselves at the door.

There is no doubting the dynamism of Catherine Faller. She always has been the public face of the domaine but with the recent passing of her mother and sister, the burden of running it has fallen squarely on her shoulders. On this morning, she was a whirlwind of energy. Apart from leading our tasting, there were telephone calls to answer, visitors dropping by to make purchases, a neighboring vintner seeking some technical assistance (while courteously bearing flowers for Catherine); not to mention supervising the preparation of lunch for 10. Our tasting was conducted in their cozy and intimate living room and it can be accessed by 3 doorways. During the few hours that we were in this room, we lost count of the number of times that she whizzed in and out from these means of egress. Some writer has commented that her freneticism can be disconcerting. For us, we found her spirit to be exhilarating and totally fitting for one who has to wear so many hats. One should not forget that this type of winery is a small family operation where demands are many and resources are few. In fact, it is a testament to her larger than life personality that we felt riveted during our tasting with her and that we had her every attention despite the interruptions.

Our lunch with her is a shining example of the generosity of the Fallers. We had originally invited her for a meal after the tasting but she immediately asked us to have lunch at the domaine. Since there were 9 of us, we did not want to impose and said only 3 would stay for lunch. When she greeted us on that morning, she insisted that all of us remain for lunch. She explained that they expect rain that day and the workers for the harvest have been sent to home so the kitchen could cater to our group. She would not take no for an answer.

The tasting was equally stupendous. We tasted many of her wines from 2014 and selections from other vintages. The sheer volume and pace outstripped my ability to keep a legible note. After deciphering my scribblings, I counted 16 wines as having been tasted including 8 from 2014. This was followed by another 4 wines at lunch. At one point in the tasting, Catherine asked whether the labeling was confusing. What an understatement! I cannot track how many different wines they made without resorting to their website. It shows that in any given vintage, there may be 21 different labels. She then asked how the labeling can be made more consumer-friendly. For this, I had no answer; particularly after she said that in 2014, they have renamed one cuvee Cuvee Colette in memory of her mother and replaced 3 cuvees with a Cuvee Laurence in memory of her sister. My rather inelegant solution to this conundrum is to simplify. Although they are well-crafted wines, I shall eliminate the lesser varietals, Sylvaner, Pinot Blanc, Pinot Noir and Muscat. For their offerings of Riesling, Gewurztraminer and Pinot Gris, I shall focus on the grand cru and flagship offerings. For 2014 Rieslings, the Cuvee Colette (formerly Cuvee Sainte Catherine) is intense and concentrated; Schlossberg Grand Cru has a creaminess and lingering palate; the star of the show is the Schlossberg Grand Cru Cuvee Sainte Catherine which is round and elegant. 2014 Pinot Gris is ably showcased by Cuvee Sainte Catherine with its hazelnut sweetness and Altenbourg with its candied nose and finish. For 2014 Gewurztraminers, there is only one Cuvee Laurence made from fruit from Altenbourg, grand cru sites of Grand Furstentum and Mambourg (this is the cuvee which shall replace the 3 Gewurztraminer cuvees bearing the name of the respective sites). This wonderful nectar is very fragrant and infused with exotic lychee flavors. For me, it is the wine of 2014 vintage and given its scarcity, the wine to buy either to drink or to lay away in the cellar. Highly sought after are their boyritised wines (sweet wines), namely, L’Inedit, Vendanges Tardives, Selection de Grains Nobles and Quintessences, the pinnacle of sweet wines, but none has been bottled for 2014.

We were then ushered into the rustic kitchen for a sumptious Alsatian lunch consisting of lentil soup, Riesling chicken with Alsatian pasta, cherry tart and artisan cheese from the neighboring farms. The fare was homemade and cooked on a wood burning stove. In apt counterpoint was pairings with 2005 and 2006 Schlossberg Grand Cru, 2012 Gewurztraminer Furstentum and with dessert, the 2009 Pinot Gris Vendanges Tardives. Borrowing a tagline from the commercial, the experience was … priceless! 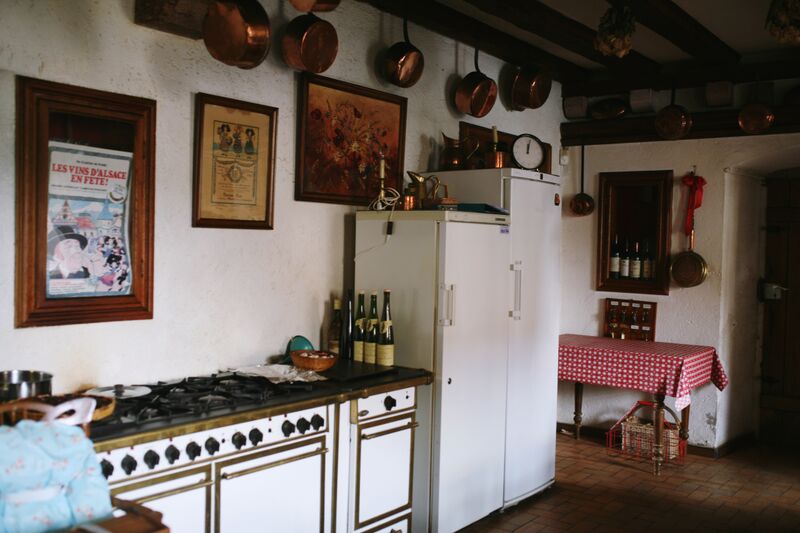